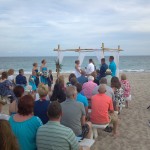 “DJ Mighty Quinn”  was challenged with providing two separate systems of sound and music at the Drew wedding at The Islander Hotel and Suites on Emerald Isle NC..
The ceremony was set up with a battery powered speaker and digital music source and a microphone for the pastor and bride and groom. this was set up right on the beach with steel drum music playing for seating…. This actually entertained all the beach-goers around for almost 30 minutes. The bride , Jessica, had requested “Jessica” ( her grandmothers name as well) by the Allman Brothers to be played for the entire 7.5 minutes as the whole wedding party made it’s way, barefoot, to the tiki hut setting…. Then the beautiful bride was escorted by her father to the beach as “A Moment Like This” by Kelly Clarkson was played…. 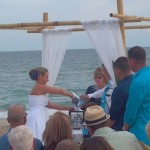 They made a very symbolic gesture, as bride and groom, filling a photo frame with multi colored sand signifying the union of families… 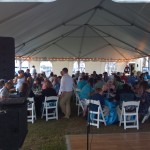 After the ceremony the bridal party stayed on the beach for photos and everyone else went to the cocktail party in the tent on the grounds of the hotel. This was an entirely different set up in a tent with LED lights for dancing and lighting the tent top for mood.
Great mix of country and rock and oldies for the crowd for dinner and cocktail hour… 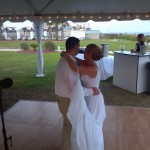 Next was a great dinner catered by Walter Hancock.
The event was flawlessly planned and ran by event coordinators Katy and Kelly and Chelsea Donovan.
Then came the fun parts. The father / daughter dance … the groom / mother dance and the ceremonial chicken dance… Music was mixed till 1030 and everyone had a great time ending it in a 65 person, attached at the hips, through the entire hotel grounds, “Party Train” by the Gap Band. then back to the dance floor for a sing along of I got friends in low places. 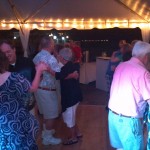 For “DJ MIGHTY QUINN” it was…. A great family event and lots of fun…. Saturday Night May 12th 2012 at the Islander Hotel and Suites on the Emerald Isle North Carolina… For more info on how to select a DJ for your wedding or event go to http://www.djprofessionalsandvideo.com/index.php.

Tags: LED lights for dancing and lighting the tent top for mood. Great mix of country and rock and oldies for the crowd… then came the first dance, The Islander Hotel and Suites on Emerald Isle NC, wedding